Whataburger Air Jordan I customs by Dank and Co. bring together two Texas based operations. Whataburger first opened in 1950 proudly serving a “Bigger Better Burger” in Corpus Christi, TX. In the early 2010’s Jake Danklefs took his sneaker customizing business full time out of San Antonio, TX. If not for a chance encounter of a custom sneaker job this project might not have come to be. In 2012 Danklefs custom painted a pair of Nike Dunk low shoes with recognizable Whataburger motifs of orange and white with stripes and the brand logo on the heels. Danklefs was well established in the world of custom sneakers at that point, but as the Internet works in weird ways the Whataburger shoes didn’t really catch attention of many until 2015. In October 2015 Whataburger tweeted a photo of them with the popular “What are thooose” tagline of the time. Jump forward over a year later and here Danklefs is featured on Whataburger.com.

As part of a giveaway, Whataburger commissioned Danklefs for this Air Jordan I custom. Using the Shattered Backboard AJI colorway the upper was painted white, black areas painted orange and Whataburger stripes and logos painted in similar fashion to his first Nike Dunks. For comfort, the sock liners were reconstructed with a soft lambskin liner to replace the black mesh sock liners. Lastly fitting branded insoles, wooden shoe trees and a box complete the pair. As one of three pairs of Whataburger custom kicks Dank & Co. will make, these are up for grabs via their #Whatathosecontest. Customers are asked to share their personal order of the many toppings the restaurant offers with the winners receiving one of the three custom kicks.

You can check more work from Dank & Co. at JWDanklefs.com and on Instagram.com/jwdanklefs. Also be sure to checkout the feature on Danklefs here at Whataburger: The Sole of an Artist and more about the contest here: #Whatathosecontest The Whataburger Air Jordan I Custom by Dank & Co. 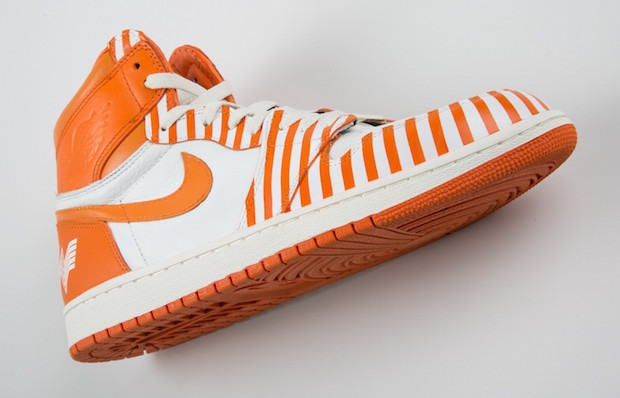