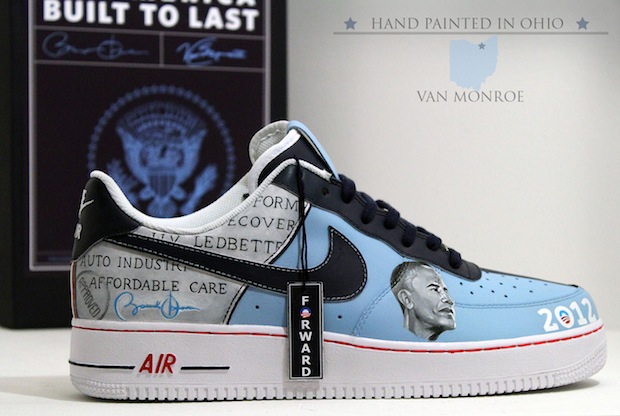 2012 marks the year of the United States’ most important presidential election. Polls are supposedly pretty even between the two Democratic and Republican candidates of Barack Obama and Mitt Romney. The landscape and impact of social media on the election and debate of pertinent issues has only fueled the political conversations across the country. In the past politics are a seldom used theme amongst sneaker customizers, but one Van Monroe let the idea take his work to amazing heights in 2008. 4 years later as a sequel to his custom Air Force 1 in 2008 Cleveland, Ohio sneaker customizer Van Monroe has created another Barack Obama themed pair of art.

A comparison of the ’08 and ’12 pairs for one shows Van’s growth in design skills. The use of color, graphics, text and overall detail keeps your eyes busy but also provides a uniform design. One glance of the finished custom and this statement from Van shows his passion for the project:

“The Obama 2012 Sneaker is based on the Presidents accomplishments over his first four years and how I believe he moving the country in the right direction. The stitching illustrates his policies at work, just as the threading keeps the shoe from unraveling, I believe the Presidents agenda for America has saved us from slipping into a great depression. The right shoe carries a hang tag displaying the campaigns slogan “Forward” I accompanied  this message with a side view of President Obama. I pay homage to the original Obama 2008 sneaker through the black and white illustrations on both sneakers. Hopefully my audience can appreciate my goal of showing the Presidents achievements and his growth as a leader.  With this new sneaker, you also get a glimpse into the degree of my maturation as a designer since the last time I paid homage to Mr Obama.” – Van Monroe

In 2008 Van’s Obama custom shoe was desired by everyone from celebrities to the Smithsonian National Museum of African American History. In a few days time will only tell if this design can reach further heights. Check out more work from Van via VanMonroe.com and be sure to follow him on Twitter: @VanMonroe